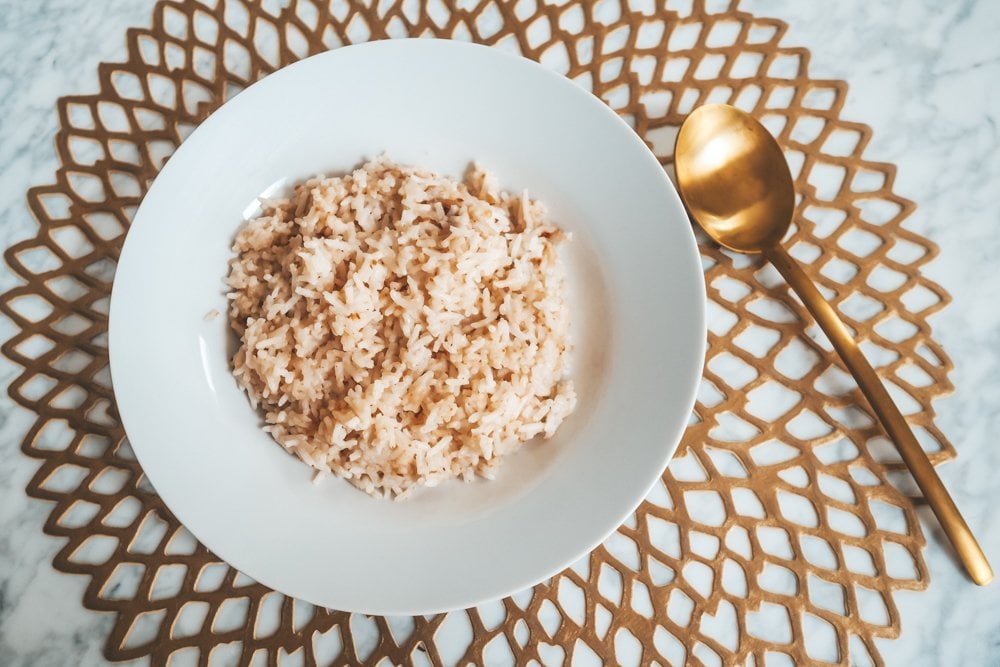 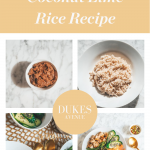 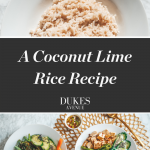 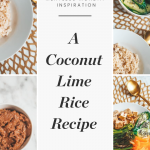 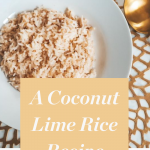 A decadent coconut lime rice is one of those easy dishes that can transport you from your pantry to a sun-drenched beach. It took a few tries to get right, but this is now one of those super easy exotic dishes that takes no time at all, and will impress any guest.

The real game-changer in this dish, in any dish really, is the use of layers of flavour to create depth and excitement. It is not enough to cook up a batch of rice, mix in some coconut milk and call it a day – for a start, coconut milk loses some of its coconut taste when heated, and even so there is no texture or real burst of flavour beyond the creaminess given to the dish. The same goes for the lime – if heated too much, the juice of a lime can lose its freshness and sharpness and taste one dimensional if not cloying and dull.

With some inspiration from South Indian, Caribbean and South East Asian cuisines, I’ve come pretty close to my ultimate coconut lime rice recipe. The dish is quite foolproof too, so it could probably be made just as easily in a rice cooker or an instant pot. I love it and I hope you will too – enjoy!

Kerisik is a Malay / Singaporean / Indonesian coconut paste made from fresh coconut that has been browned and pounded, and is used to add coconut flavour to dishes and thicken up curry dishes (like rendangs). This recipe is not authentic, but is a tasty adaption of the original (and can be enjoyed like nutella on a piece of gluten free bread!).

If you are subbing in white rice for brown rice, make sure to follow the cooking instructions.

Make sure to garnish with some coriander / cilantro to bring out the lime coconut flavour.

As mentioned above, the key to this coconut lime rice recipe is the reinforcement of the coconut and lime flavours. You can do this in a couple of ways:

1) use contrasting flavours to enhance the primary flavours of the dish – in this case, the creamy, fruity and sweet flavour of the coconut is enhanced by, and in turn, enhances the flavour of the lime, which is sharp, acidic and fresh.

2) use complementary flavours or similar flavours to add depth to the primary flavours of the dish – in this case, we use more than one type of coconut product to reinforce the coconut taste, and likewise the same with the lime.

The good thing about most of these coconut derivatives (barring the fresh ones) is that they keep really well (stored at room temperature), they are (relatively) cheap and widely available in most places. Given that you are not really constrained by availability of products, the question of which ones to chose becomes: what do I want from my coconut product?

In the end, I chose the products which I believe give the right balance of flavour, texture or consistency and ease of use. To me that meant using:

Carrying on with the theme of adding complementary coconut flavours or textures, you might try to replace the water used to cook the rice with coconut water, or drizzle some sweetened coconut cream atop the finished coconut lime rice, or even garnish with coconut flakes (for texture, taste and a bit of flair!).

The other limb of this is how to infuse additional lime flavour into the coconut lime rice recipe. In the same way that coconut can lose its flavour when heat is applied, lime can lose its freshness, sharpness and sweetness if treated incorrectly. The other thing to note is that lime can also be sour and some lime products – like Persian dried limes, preserved salted limes, and dried limes – are much more sour then they are fresh. In the end, the right mix of lime products (for me) was:

Feeling adventurous? A small touch of lime preserve loosened up with a touch of water could be used in place of juice of a lime, or maybe some candied lime peel could be used instead of kaffir lime leaves – I’d just try to avoid overly sour or savoury preparations of lime, but beyond that, go crazy!

In keeping with the preparation of the coconut lime rice itself, when pairing dishes I look for other elements that will either complement or contrast with the flavours in the recipe itself. By doing that, you also create a theme or underlying current of flavours which carries on all throughout the dish.

For starters, a sprinkle of coriander/cilantro will add to the citrus and floral scent of the coconut lime rice recipe, as well as adding some colour. Otherwise, I’d go for other dishes:

You can also use this as the base for a vegan coconut rice bowl – check ours out below!

We hope you enjoy this coconut lime rice recipe and share it with your loved ones – if you do, please leave a comment or drop us an email, we would love to hear from you!

PIN ME FOR LATER