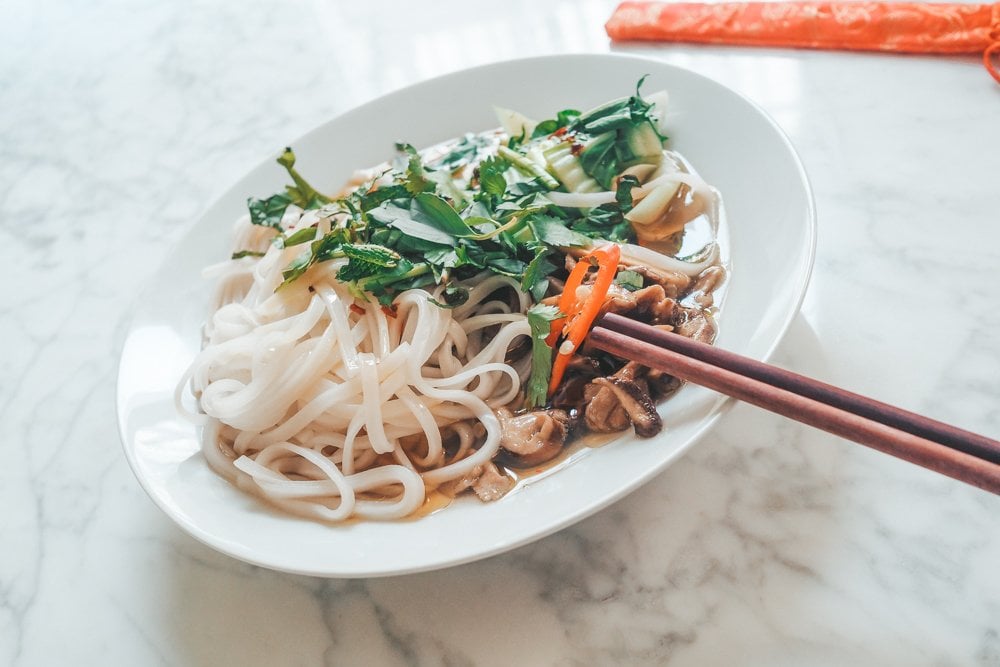 A Vegan and Gluten Free Pho Recipe To Warm Your Heart 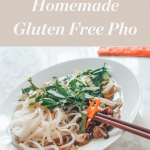 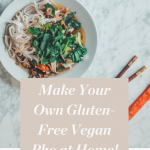 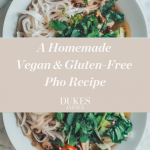 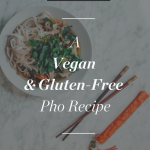 This dish had been a part of my life long before I went vegan, so I am excited to be able to share this awesome vegan and gluten free pho recipe that can easily be made at home. The recipe takes me back to a Vietnamese eatery, almost hidden in a grim industrial / entertainment park with cinema, bowling alley and a couple of other restaurants. A small, invisible Asian cafe called Cafe East – invisible, that is, were it not for the huge queues of people.

The restaurant did not take reservations, it did not serve alcohol, and was by no stretch of the imagination a swanky or sophisticated place, but if you got there at the wrong time, you could spend 90 minutes waiting for a table to open up. I would take any visiting guests to Cafe East, and have been known to eat there three or four times in a week. It was not only one of the best Vietnamese restaurants in all of London, but definitely one of my favourite regular restaurants.

Vietnamese cuisine is arguably one of the most balanced, accomplished and complete cuisines in the world – it is a fabulous mix of sourness from lime and fish sauce, sweetness from palm sugar, heat from dry and fresh chillies, saltiness from soy sauce, fragrant spices and freshness of herbs, and just intense umami flavours. Every dish, whether it is the ubiquitous pho (pronounced ‘fuh’ – the clear, fragrant broth served with flat rice noodles, chilli oil and herbs) or a simple Vietnamese summer roll, is an exercise in balance.

Whilst, at the time of writing, I have not yet been to Vietnam, those who have been (or at least visited by way of their local Vietnamese restaurant) would be hard-pressed not to agree that pho is one of the best dishes to warm the depths of your soul.

It has been many years since I tried my first pho, yet my love for this intense umami broth has remained. I enjoyed it so much that when I went vegan, I did my research and through trial and error, perfected my version of a gluten free broth (as well as the accompanying chilli oil). I can enjoy this dish all year round – the vegan umami broth elevates the rice noodles and vegetables to another level, so I just had to share it – I hope you love it as much as I do.

How you combine these items together is entirely up to you. I personally love the vegan umami broth served with some bok choi, a mix of mint, coriander and Thai basil, and lashings of spicy chilli oil. What is certain is that the dish is gluten free, vegan friendly (i.e. dairy free and without fish sauce) and is a tasty plate of food that anyone can churn out of their home kitchen.

What really makes this broth gluten free is the use of tamari or gluten free soy sauce. Wheat or other grains containing gluten are not really as prevalent in Asian cooking as in Western cuisine, so beyond that all of the ingredients should be naturally gluten free. The wonderful thing is that the vegan umami broth can be frozen and used again later (not that it has ever lasted that long!), and used as a simple soothing soup in its own right. Check out the recipe card below and give it a try!

There are two main elements to the broth itself (besides the seasoning): the vegetables and the spices.

Traditional recipes call for charring ginger and onions over an open flame to give some roasted flavours to this gluten free pho. I have to say that I am not brave enough to do this in my small kitchen in London, so I find that using your oven’s broiler setting gets as close to the desired effect without the risk of burning your house down. Note that you should keep the papery skin of the onions on – it helps to darken the umami broth and contributes to the roasted flavours (just be careful not to burn the skin!).

The pho broth is normally made with stock. Rather than using a pre-made stock, I use my own “stock shortcut” and broil a bunch of additional vegetables alongside the ginger and onions – carrots, celery, garlic, (more) onions, leeks (if you are a fan of anise flavour you could also add a fennel bulb) – and add these all together in a stock pot with water. By roasting the vegetables, you bring out some of the natural sugars and impart further roasted flavours into the broth, without having to make a stock separately.

Lastly, I add in shiitake mushrooms to the stockpot. The addition of shiitake mushrooms has a two-fold purpose – one is to give an additional flavour profile to the broth, the other is to heighten the umami flavour of the broth using these quite meaty mushrooms. I add pan fried mushrooms back to the gluten free pho as a topping as a later stage.

The flavour profile is similar to the classical Chinese five spice mix – star anise, fennel seeds, black peppercorns (or Sichuan peppercorns if you have some lying around), whole cloves and cinnamon. What I love about Vietnamese cuisine is the balance, so if you are worried about the broth tasting like liquorice, fret not because the addition of other spices round out the spice taste of the gluten free pho – coriander seeds (for a bit of citrusy notes), both black and green cardamom (for an exotic fragrance and floral note), and bay leaves (for herbal and floral notes).

The spices get toasted to bring out some of those essential oils and make them altogether more fragrant. It is also important to use whole spices and not powder – for one, the spices would just burn if toasted, and second they will need to be extracted from the broth at a later stage. My trick is to use a moderate flame, moving them constantly in a pan or pot until the spices give off their scent. A little bit of smoke is fine but don’t go crazy.

This gluten free pho is best served with some rice noodles, some blanched bok choi, slices of cooked mushrooms, with a handful of mix of herbs (some of the authentic Vietnamese herbs are difficult to find outside of Vietnam or specialist shops, so I use Thai basil, coriander and mint) and for the adventurous souls out there add in some vegan gluten free chilli oil (see recipe card for Sichuan Chilli Oil).

Rice noodles are fantastic – easy to cook, chewy and they are a great base for other flavours. For our gluten free pho recipe, make sure that the noodles you choose are only made of rice flour (or at least do not contain wheat or other gluten-containing grains).

The other thing to note is the shape of the noodles themselves. My favourite are the traditional narrow flat pho noodles, which are easy to handle and I find give some grip for the pho toppings to grab onto. I prefer those to the bun noodles which are round, spaghetti-like or thin Vermicelli style, as they do not give the same grip and (in the case of the Vermicelli noodles), tend to clump together.

Regardless of the noodles you do try (you may go completely off piste and use glass noodles or mung bean noodles – follow your muse!), the noodles are cooked ahead of time according to their package instructions. In the case of my pho noodles, I boil the noodles for five or so minutes, then run under cold water to stop the cooking. This also allows you to cook the noodles ahead of time and set them up in a bowl ready for the toppings and the vegan umami broth.

Amazon stocks these rice noodles which are similar to the ones I find in my local shop. My suggestion is to take a look at your local Asian supermarket and get lost in the aisles.

Whilst the gluten free pho broth is the heart of the recipe, and the rice noodles are the body, the toppings are the life and character of the dish. At first glance, a gluten free pho, one which is vegan nonetheless, may seem like it is limited in options – that being said, there is a multitude of vegetable and vegetable products that add to the flavour and texture of the dish:

4. The Herbs, Limes, Bean Sprouts and Other Garnishes

In as much as the vegan umami broth is packed full of warmth and spice, the herbs add an extra layer of complexity to this already wonderfully tasty gluten free pho recipe. As with the rest of the dish, there are variances:

The chilli oil is “just” a condiment in the same way that Louboutins are “just” shoes – simply put, it is not “just” a condiment but something transcendent. A traditional recipe may include things such as soy sauce (not gluten free) and dried shrimp (not vegan), so I’ve adapted my recipe to ensure it is both vegan and gluten free. Moreover, I use mounds of Sichuan peppercorns and chilli flakes to give heat and an amazing numbing sensation which is unique to Sichuan peppercorns.

This may not be a wholly traditional representation of the Vietnamese chilli oil, but with spices infused into the oil and the numbing heat from the chillies and peppercorns, I hardly mind. If you have the time (it should not take more than 45 minutes to make a batch), ingredients and patience, it is definitely worth a try at home. Otherwise, you can try laoganma Chinese crispy chilli in oil (although be sure to check the packaging about its allergens!).

To add a bit of texture to the chilli oil, try adding in toasted seeds to the chilli mix before the hot oil is added - some use sesame seeds, I've used sunflower seeds. You could also try peanuts.

To bring this dish all together, first grab a handful of cooked rice noodles and place in them in your desired serving bowl. Next, place your greens, tofu and other toppings on the rice noodles. Ladle the hot umami broth over the dish to heat the noodles and toppings up. Finally, serve the dish with a side plate bursting with your herbs, bean sprouts, fresh chillies and lime, and a small dish with your chilli oil.

If you have stuck around until here, I hope you have been inspired to give this vegan and gluten free pho recipe a go. Aside from the specialist ingredients, all items can be found at home and if you are prepared, you can be eating a delicious gluten free pho within an hour.

PIN ME FOR LATER!