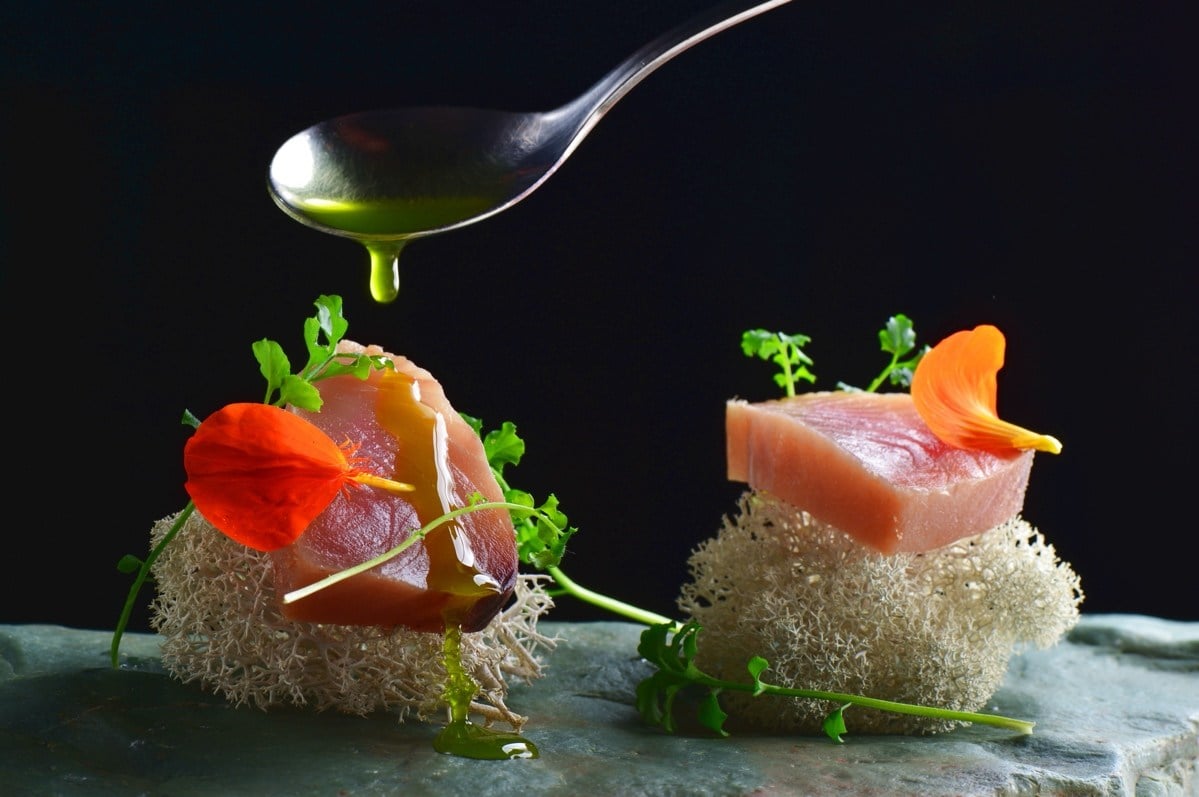 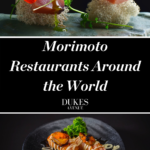 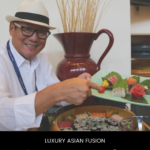 First capturing our attention on the infamous Japanese cooking show, Iron Chef, and again on the spinoff show Iron Chef America, Chef Masaharu Morimoto is especially known for his unique blend of ancient traditional Japanese cooking styles, and Western flavours. But there is so much more to this chef than his entertainment career.

Behind the glitz and glam of the Food Network show, there’s a brilliant chef who’s won many awards and recognitions from the culinary field, worked with some of the top chefs in the world, and even opened multiple highly acclaimed restaurants around the globe. Thanks to his bold, innovative cooking style that both honours and steps out of cultural traditions, Masaharu Morimoto has created a line of restaurants unique to this cooking style that have become some of the most prestigious restaurants in the culinary industry today.  Here’s our take on the Masaharu Morimoto restaurants around the world.

The fame didn’t come easy. In fact, Masaharu Morimoto’s story starts with a single ramen restaurant in Japan. Morimoto was born and raised in Hiroshima, Japan where he had the privilege of learning traditional Japanese cooking styles such as ramen, sushi, and kaiseki. Kaiseki is a traditional multi-course Japanese dinner that requires highly trained cooking techniques which the young chef eventually mastered.

While Chef Morimoto had been trained in traditional Japanese cooking, something about Western cooking styles and flavours always drew him in. So, the aspiring chef decided to plan a trip to the United States to fully immerse himself in the culture and food. In 1985, he sold the ramen restaurant and took off for the U.S. During his travels he was even further influenced by Western cooking styles and soon developed a new vision for a unique blend where he could combine Western and Japanese cooking techniques.

Soon after his trip, Morimoto made the permanent move to New York City where he established a new life for himself. While he was there, he had the opportunity to work for some of the most prestigious restaurants in the city including Nobu. His time at Nobu proved successful as he rose through the ranks and eventually became promoted to Executive Chef. It was this position that launched him into the exciting venture of restaurant ownership.

Masaharu Morimoto Restaurants Around the World

In 2001, chef Masaharu Morimoto decided to leave his position at Nobu and set out to open his first stateside restaurant. He paired up with creative mastermind, Stephen Starr of Starr Restaurants, and opened his own eponymous restaurant, Morimoto, in Philadelphia. The restaurant truly is a one of a kind dining experience with an original interior design concept from visionary, Karim Rashid. Throughout the entire space, Rashid blends traditional Japanese elements with organic, soft abstract design.

The restaurant features what Morimoto does best, ancient Japanese cooking with Western flavor fusion. In fact, Morimoto Philadelphia is especially known for their Omakase menu – which in Japanese translates to “I’ll leave it up to you”. Essentially, this is a chef’s choice tasting menu, and a great way to experience a wide array of delicious entrées at Morimoto. With a perfect blend of Eastern and Western traditions, guests can fully appreciate highly refined Japanese cooking with incredible presentation and atmosphere.

It was no secret that Morimoto Philadelphia had quickly turned heads in the culinary world. The restaurant gained attention and quite a hungry fanbase in a short amount of time, leading Morimoto to expand his name and open a new restaurant in New York City. Thanks to his bold business venture, we now have Momosan – an incredible Japanese noodle-style restaurant.

At Momosan, noodles take the centre stage of every dish. The restaurant is especially known for their signature tonkotsu ramen dish – a quality only found in the hands of an Iron Chef. But alongside their unforgettable tonkotsu ramen, Momosan fans will tell you that the most popular dishes also include Tokyo chicken ramen, tsukemen, and tantan.

What’s more is Chef Morimoto has also created a line of sakes, beers, and wines that he also serves at the Momosan restaurant. So, whether you’re stopping in for a quick lunch, or feasting on appetizers and noodles for dinner, you can wash it down with a signature sake by none other than Masaharu Morimoto himself.

Morimoto XEX, located in Roppongi seijōki-dōri, in Tokyo, serves not only an incredible dining experience, but a meal you will never forget. This upscale restaurant is frequently visited by both local and international celebrities who easily fall in love with the overall aesthetic and eclectic Japanese and Western cuisine fusion.

This two story restaurant features a large wide spread bar lounge with a gorgeous white wood sushi counter. There are four teppanyaki counters on the ground floor – two large and two small – with free dining space and even private dining space on the second floor. If you’re lucky enough to score a seat at the sushi bar, you will have the privilege of watching the sushi masters at work, prepare your meal right in front of you for a memorable experience. Although all of Chef Morimoto’s restaurant are extremely unique, Morimoto XEX is especially important.

Known for their incredible dishes that combine Western flavors with Japanese style cooking, it was this very restaurant that earned Chef Morimoto his first Michelin star in 2008 from the Tokyo Michelin Guide. Since then, the restaurant has been proudly booked out, making it an exclusive fine dining opportunity if you’re fortunate enough to land a reservation.

Nestled in the rolling hills of grape vines and blue skies, chef Morimoto had the genius idea of opening one of his infamous restaurants in none other than Napa Valley, California. Known for their fine wines and historic architecture, Napa Valley has a luxurious reputation to uphold, and Morimoto Napa does not fall short.

When you first walk into the restaurant, you will not be surprised to find that tradition is the inspiration for the interior. With old-fashioned high-back chairs, bright coloured beaded couches, and wrought iron chandeliers, the Morimoto Napa location offers a comfortable, yet whimsical dining atmosphere.

While dining at Morimoto Napa, you can sip on Masaharu Morimoto’s signature sake at the Momosan Sake Bar. Interestingly enough, this is Napa Valley’s first and only sake and Japanese whisky bar. You can also enjoy Chef Morimoto’s signature sushi rolls at a large sushi counter made of a wood texture and concrete for a chic, industrial feel.

Chef Masaharu Morimoto is big on location. While he quickly expands the Morimoto name, he is careful to place his restaurants in atmospheres that match his food and design. And what better place than the Taj Mahal Palace in Mumbai? Critics have described Wasabi as ‘an authentic Japanese culinary treasure’, and definitely worth stopping by for dinner if you are traveling in the area.

The restaurant is known specifically for their Japanese seafood dishes paired, of course, with wasabi. In fact, Morimoto specifically flies the fish in daily from a Japanese fish market to achieve the fully authentic Japanese dining experience for his guests. Of his most popular dishes are the black cod miso, white fish carpaccio, and wasabi crème brûlée, although the menu keeps expanding and changing constantly.

The interior of the restaurant is stunning in and of itself. The soft, warm lighting over neutral wood colors and materials, tall arched doorways, and extravagant floral displays scattered throughout the restaurant, it is no wonder that Wasabi is one of the hottest Morimoto locations in the world. It was even recognized as one of Asia’s 50 Best Restaurants in 2016 by San Pellegrino.

A post shared by The Taj Mahal Palace, Mumbai (@tajmahalmumbai)

More Restaurants to the Morimoto Name

While these are among some of Chef Morimoto’s most popular restaurants, he didn’t stop there. Morimoto has quickly expanded his restaurant name to cities like Las Vegas, Kyoto, Doha, Boca Raton, Waikiki, and many more signature concepts. Now, Morimoto owns and operates 15 restaurants all around the world, with different locations opening every year. While all vary quite different in overall atmosphere and interior aesthetic, all of the Morimoto restaurants feature some variation of traditional Japanese cooking styles with Western flavours and food preparation techniques.

What started out as a trip around the United States soon proved to be something much bigger. His passion was ignited, his dream was coming to life right before him, and after years of hard work and dedication to his craft, Chef Morimoto is showing no signs of slowing down.

Aside from his brilliant food creations, what really sets chef Masaharu Morimoto apart from the rest is his extremely intricate food presentations and the overall ambiance of his restaurants. Not only does he design an unforgettable meal, but he also works to create a location that awakens the senses and allows you to enjoy the meal in a whole new way. With his highly refined cooking knowledge and a sharp instinct for flavour, Morimoto launches his diners right into the heart and soul of Japan, with just a twist of something Western.

Jenna Hubbard, California dweller and lover of the finer things, is a full time writer for luxury lifestyle blog, ClassyLifestyle.com – a blog striving to educate, inspire, innovate, and curate a classy, modern lifestyle, achievable for all. When she’s not writing about Michelin starred restaurants and the latest fashion drops, she enjoys being with her family, going to the beach, and writing short stories in her free time.

If you’re looking for more fantastic restaurants around the world, be sure to check out our articles on the White Rabbit in Moscow and Voro in Mallorca!