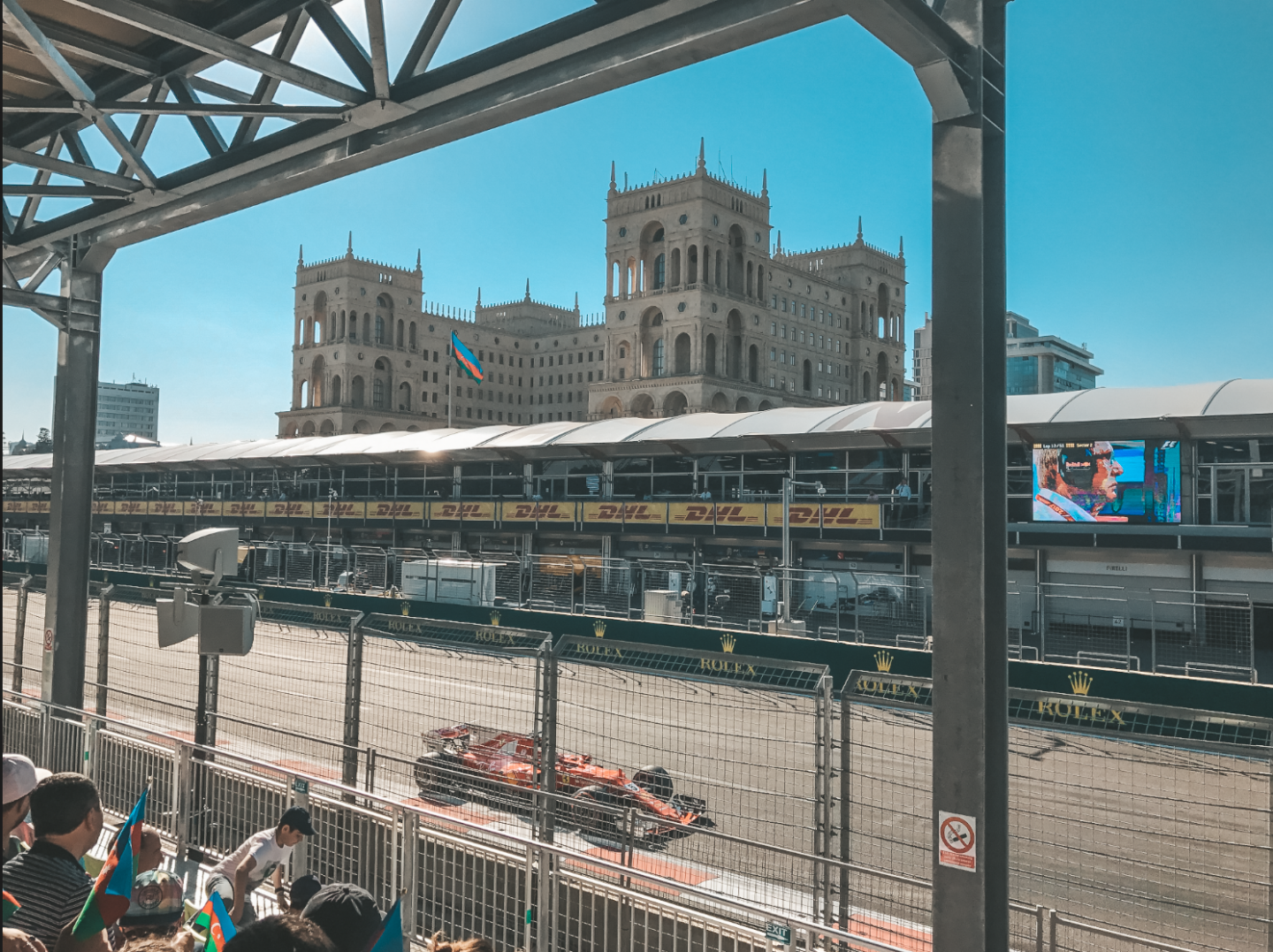 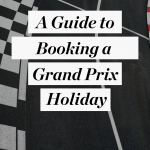 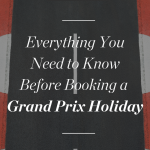 Whether you are a motorsport aficionado or not, a Grand Prix holiday can be an exciting and action-packed one. There is so much more than meets the eye beyond the racing: the noise, the excitement, the pageantry – both on the track, as well as off it – that you owe it to yourself to consider experiencing a fantastic Grand Prix holiday in person.

So how can one go about planning a Grand Prix holiday? You can very well book an off-the-shelf tour, but as an intrepid traveller, I prefer to organise my own journeys. With a bit of research and planning, you can substitute tour guides, coaches and group tours for exclusivity, authenticity and character. Anyone can enjoy a great trip regardless of who crosses the finish line first.

The Ultimate Guide to a Grand Prix Holiday

For those unfamiliar, Grand Prix (literally “big prize” in French) typically refers organised sporting events. For those interested in motorsport, this refers to racing, either as part of an organised calendar of events or stand-alone events. These events or series may involve motorcycles, open-wheel single seat racing cars, “prototype” cars, and sports cars to name a few, fuelled by fossil fuels, bio-fuels and most recently electric. There are all sorts of different series that differ by country or region, level, drivers, format – indeed there is something for every taste, so before booking anything you should know what you want.

This may be a function of where you live and what sport you are exposed to – for example, small motorcycles and scooters are a popular mode of transport for young people in Spain and Italy, so motorcycle racing inevitably has a larger following in those countries and continental Europe generally. Similarly, stock car racing in the US originated from retired Prohibition-Era bootleggers running their modified cars for spectacle rather than for profit, which created many legends in the hearts of the people. This leads to NASCAR, its current iteration, which carries on that cultural fascination in America.

You may let your principles guide – if you, like many others, concern yourself with the environmental damage caused by fossil fuels, perhaps an electric formula, such as Formula E, could be how you reconcile a passion for racing with your love of the planet.

It would be well worth doing some research – watch a race on television (or a “best bits” clip on YouTube) – and determine which one suits you. MotoGP may not be something you would want to spend thirty minutes sitting down on the sofa watching, much less planning your Grand Prix holiday around, but you may like car racing enough to watch the whole Le Mans 24 Hour race without a break! Ultimately, the more you know about the format, the rules, the teams, the drivers/riders, the more vested you will be and the more you will enjoy it.

When To Visit and How Long To Go For?

So you’ve identified your sport of choice, and you’re now committed to planning your Grand Prix holiday – where and when do you go? The first thing to note is your own availability to travel and visit a race event. Naturally, your preferences as to the type of motorsport and the type of holiday should be first and foremost in your mind.

Remember that most organised racing series tend be to be organised into race calendars. Formula 1, for example, runs between March and December every year with over twenty races, centred around the European events hosted during the summer months, and the “fly-away” races hosted in far flung regions of the world. The Australian Grand Prix in Melbourne’s Albert Park has been the season-opening race for many years, whereas the recent season-ending races have been hosted in Abu Dhabi.

Races tend to be logistically challenging events to plan, so race calendars are usually secured well in advance, with the exact dates for the forthcoming season often being proposed mid-way through the current season. Either way, one will have plenty of time to organise flights, tickets, accommodation and the like.

As most motorsport does not often run in the winter months, your Grand Prix holiday is likely to be more sun and fun than skiing. That being said, some global motorsport may start out in the southern hemisphere’s summer and move into the northern hemisphere’s summer as the season progresses (F1 is a good example). Rally is very much an all-weather venture and runs pretty much all year in different weather, so you may enjoy rally Sweden in February following by a Lapland adventure. To the same token, you could visit the south of France in January for the fabled Rallye Monte Carlo and follow in May for the Grand Prix de Monaco.

Bear in mind that most organised races happen over a series of days, with a few days allocated to practice and qualifying, culminating in a race on the final day. For larger televised events, these tend to happen over a weekend with a race day on a Sunday. That being said, some events may last longer with “press days” or “fan days”, corporate hospitality events, supporting races, concerts and the like becoming just as much an event as the race itself.

Indeed, many organisers now spend large budgets to ensure that their events cater for everyone, and also get support of tourism authorities to promote the location as a destination. With this in mind, a very race-centric holiday can take a minimum of two days (with minimal travel and minimal outside events) and up to ten days for a leisurely touristy kind of trip.

Just as important as the ‘when’ to book your Grand Prix holiday is the ‘where’. Your given sport may be geographically limited as to where events are held, or you may be unable or unwilling to visit a certain place for whatever reason, be it visa restrictions, logistical challenges or simply a lack of interest.

Once again, we can consult our race calendars for potential locations. A novice may be overwhelmed by the sheer number of races. For example, in the 2021 Formula One rostrum of contracted races, option can include:

Note: some race events are hosted on bland and uninspiring circuits, or their locations are somewhat less than breath-taking. A number of “cookie cutter” circuits were uninspiring or unprepared to offer much of a touristic product and had their funding withdrawn unceremoniously. Subsequently, these were dropped from the F1 calendars (as they could not be supported by ticket sales from genuine race fans alone).

What Is There To See?

Naturally, the non-racing related sites and sounds are dictated by which location you decide to visit.

Firstly, the racing stuff. A race event is often comprised of three types of sessions, each with a varying degree of optionality:

In summary, when planning your Grand Prix holiday, make sure you watch the race, then pick and choose everything else. If you’re a racing fan, spend some more time around the track, if not then enjoy the events!

The Other Fun Stuff

Increasingly, racing promoters have recognised that to have a greater reach than “just” racing fans, they need to keep everyone entertained. That’s not just the series organisers, but the circuit owners and tourism authorities that pay top dollar to host events – it is their imperative to put on the best show possible to shine a light on their touristic product and make the fans return in droves the next year.

The race events tend to vary depending on the level of organisation, however a “typical” race weekend hosts all sorts of events and competitions such as driver meet-and-greets, pit walks, food stalls, corporate hospitality competitions, go-karting and the like. Increasingly, celebrity-studded VIP parties and concerts draw in the crowds, just as many as the races themselves.

It is worth consulting the relevant local host website to get a full run-down of events up for grabs. Be assured that a Grand Prix will be a big event in any location, so local businesses will go out of their way to promote shopping festivals, celebrity chefs and organising an abundance of tours to support the influx of tourists. The Monaco Grand Prix plays host to pool and yacht parties, champagne lunches at Cafe de Paris, luxurious evenings at Casino de Monte-Carlo and helicopter tours of the principality. You will be spoilt for choice wherever you go.

If you must fly to your Grand Prix holiday, bear in mind that flights to the local airports will trade at a premium, so plan around your race calendar as soon as you can. As a regular racing weekend lasts from a Friday to a Sunday, peak flights will be those for inbound on Thursday evening and leaving from Sunday evening, although flights will be fairly busy from the weekend before a race to the following one.

Hotels and rented accommodation tend to fill up quickly with teams, officials and corporate guests, so when planning the accommodation section of your Grand Prix holiday, make sure to get in early – not only to ensure availability, but to avoid price gouging when booking too late. Be sure to choose somewhere within reasonable travelling distance of the main sights as well as the race event itself (this is where destination events have an edge, as those are all in the same place). Many hotels will operate shuttle bus services to and from the events, which may save costs related to public transport and / or parking.

When buying tickets, remember that many race promoters launch these almost a year in advance, often with substantial discounts for early bird buyers. The rule of thumb would be to buy something as soon as you can.

The next question is – which tickets to get? Keep in mind that you can buy tickets for each day individually or as a pack, so if you are planning on going to the race-day alone you could avoid extra expense and just buy the one-day ticket for the race, although be warned that you may be unable to attend events on those days for which you do not have tickets (such as after-race concerts).

Besides the number of days, you can choose your Grand Prix tickets based on:

We hope that you’ve found this guide useful and that you can take your own inspiration to plan your own Grand Prix holiday.

PIN ME FOR LATER